The exciting first look (in print) of the Pentamatic…

As of yet, I haven’t found evidence in print to support the March date. I do know that the Pentamatic was shown at the 36th annual ‘Master Photo DeaIers & Finishers Association’ trade show (MPDFA) held in St. Louis from March 21-25, 1960. I don’t know if the Pentamatic was released in Japan at an earlier date. From the progression of the serial numbers, by March 1960, about 1,500 cameras had been produced since production began in December 1959 at the Yashica Suwa factory. I doubt that there were enough cameras by March to support any widespread release in Japan or in Asia at that time. By June 1960, about 6,000 cameras had been built. There may have been enough to ship to the world markets starting in April and May. At their peak of production (summer 1960), it looks like Yashica was rolling out about 1,200 to 1,400 cameras each month.

Part two of the “Camera Holiday” in Japan promotion. Very nice mention of Yashica’s factory in Suwa and the wonders of Japan! 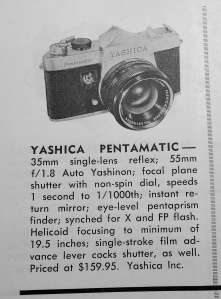 Yashica provided this first ever look at their new Pentamatic SLR at the March 1960 MPDFA trade show in St. Louis.

First published look at the new Pentamatic from Yashica. May 1960

Self-timers as they were called back then, were available on some cameras in the 1950s and early 1960s as a built-in feature. But most were not including Yashica. The answer… a stand alone device that could be attached to the shutter button via a screw thread, and when set gave the photographer about 5 to 8 seconds to join in on the fun of being photographed. Great for group shots or for showing everyone back home your smiling face in your favorite local. I’ve used them (the built-in kind) for firing the shutter during long exposures whenever my camera was securely attached to a sturdy tripod. The Pentamatic was designed in middle 1959 and basically went into the marketplace by the spring of 1960. It was a cost savings plan by the Yashica bean counters (I’m sure that was the case or it was that they rushed it into production and just plain forgot it) to save a few bucks whenever and wherever they could. So no built-in timer. They also left off a built-in or at least somewhat coupled exposure meter… I’ll leave that for another post. So here are two views of the how it was done back then. Surprisingly Yashica used another manufacturers timer (Waltz) in the Pentamatic instruction booklet! The second image corrects that injustice! It appears that Yashica did not make stand alone self-timers but relied on others to supply them. Maybe one or two other companies produced them all with different logos on each, but it is highly unlikely that this is a Yashica made item. 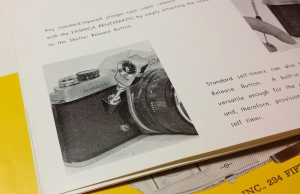 Yashica’s 1959 instruction booklet showing another manufacturers self-timer in use.

How the original instruction booklet should have looked. Yashica branded self-timer with the Pentamatic.

Yashicas’ Headquarters were in Tokyo in 1958 but this building was located at the factory campus in Shimosuwa. This image is from the ‘Yashica Products Guide’. 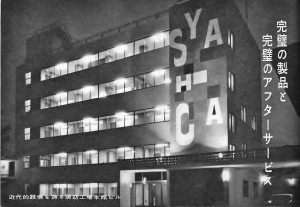 The Yashica Pentamatic was a bold entry into the world, albeit small world at that time, of the fastest growing segment of the photographic industry… 35 mm Single Lens Reflex (SLR) photography. Yashica had grown by leaps and bounds during the decade of the 1950s. In only 7 short years, Yashica was out producing such other well known names as Canon, Nikon and Olympus just to name a few. But Yashica in 1959 was well know for its Twin Lens Reflex (TLR) medium format cameras, excellent 35 mm rangefinder cameras and movie cameras… not SLRs. If Yashica wanted to contend in the “space age decade” of the 1960s, it needed a camera that would bring it into the future and it had to be something the company could strengthen its reputation on. The Pentamatic was conceived in mid 1959 and the first units were produced by December 1959. The marketing team in Tokyo had a large task ahead of them. Convince the world that this new 35 mm camera was worthy of their attention. So, boxes to ship and display their new camera had to be designed. They had to stand out on the already busy retailers shelves and window displays. Sales brochures and catalogs printed. Flyers and pamphlets distributed. Advertising campaigns launched. All this by a planned March 1960 release date! Here is just a small sample of what they produced.

An early US sales brochure for the Pentamatic. Back cover design depicted. 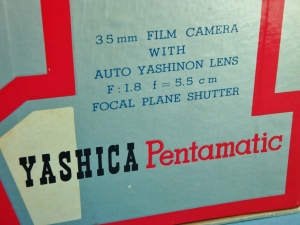 No mistaking the details of this new camera… put it right on the box! 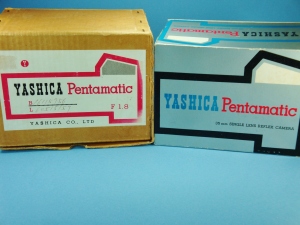 Short History of the “Mysterious” Pentamatic

Decoding serial numbers… Yashica has never been upfront with the dating of their cameras, lenses or printed materials. Instruction booklets and sales brochures are only occasionally dated and those were mostly in the 1950s. Camera bodies and lenses (and accessories) remained a mystery until now. I believe I have finally decoded the serial numbers of Yashica’s first 35mm SLR, the Pentamatic. Look closely at this camera’s serial number… 36001500… knowing a little bit about when this camera was “invented” helped me decode the number. The trademark “Pentamatic” was filed by Yashica in September 1959 in Japan. The first prototypes were built around then with the first consumer models produced by December 1959. This camera dates… 3 = March / 60 = 1960 / 01500 = 1,500th unit made since December 1959. The latest camera in my database has a serial number of 16115756. This decodes to… January 1961 and was the 15,756th unit produced since December of 1959. The earliest body in my database is 16000373 (discovered for sale in Japan 12/2015). It decodes to… 1 = January / 60 = 1960 / 00375 = the 375th unit made. 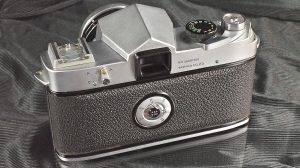 A short history of one of the most dynamic and innovative camera manufacturers in Japan during the decades of the 1950s and 1960s.

An amazing start-up before there were start-ups! In less than a decade, the Yashica Company of Tokyo, Japan, became a major player in the field of high quality, low-priced photographic equipment and cameras in the international marketplace. Competing against literally hundreds of other newcomers and established camera manufacturers, Yashica rose to market dominance by 1960.

Back when Yashica was Yashima. Yashica’s second TLR in a long line of twin-lens reflex cameras.