We haven’t paid much attention to rangefinder cameras here on the “Fanatic” – it’s not that we don’t find them interesting – quite the opposite, many rangefinder cameras associated with Yashica are groundbreaking and historically significant and are worthy of further research.

The Yashica Lynx – aka the Lynx-1000. It was the first in a long line of successful fixed-lens rangefinder cameras from Yashica in the early 1960s. The first Lynx was made in May 1960 based on the serial number of the camera in an early sales brochure (in English below).

This early box (below) confirms that Yashica referred to the camera as just the Lynx vice Lynx-1000 when it was first released. The success of the Lynx paved the way for the subsequent versions of the camera. 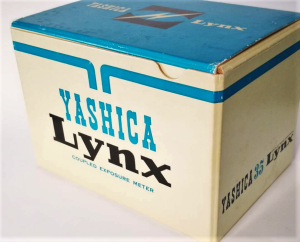 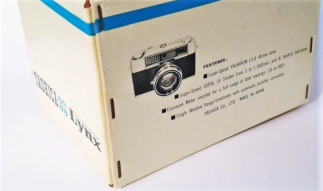 We decided to get a Lynx mainly because of the reputation of its fast Yashinon f/1.8 4.5cm lens. The Lynx we received (below) has a working shutter and super clean glass. The camera’s exposure meter does not work which is typical for these nearly 60-year-old cameras.

An overall clean example but missing an important piece – the rangefinder window is obviously missing with some damage visible to the internal pieces of the finder (top center above the lens). 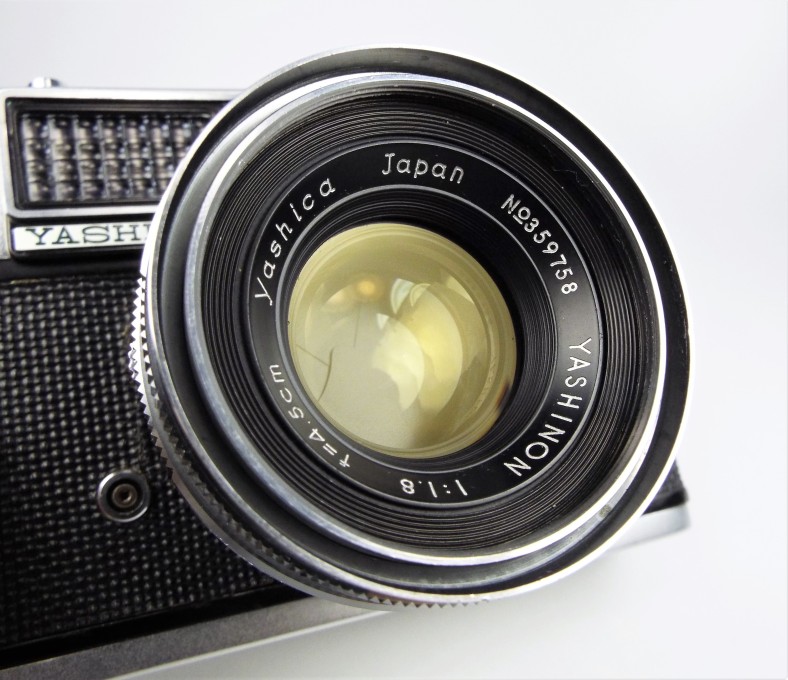 This lens (our camera) features a unique serial number (only 6 digits long) and is in a font that’s not consistent with earlier versions or versions that came later. We feel that this type of lens was made by Zunow Optical vice Tomioka Optical.

The lens on the Yashica Lynx has earned high praise and its reputation amongst photographers is top-notch. For the time period having a fast f/1.8 aperture combined with a leaf shutter (Copal-SV) with a top speed of 1/1000 second was a nice feature in a low-cost rangefinder.

***There is some chatter on more than a few Japanese blogs that some of the earliest lenses for the Lynx were made by the Zunow Optical Company. The majority of the lenses were made by Yashica’s normal lens maker, Tomioka Optical of Tokyo. No verifiable references or links are given in these Japanese blogs as to the source(s) of this claim – it would appear that at this time it may be a case of one blogger makes the claim and others simply followed suite. We’re not disputing these claims, in fact, we’re intrigued by them and have set out to either prove or disprove them. Zunow has an interesting place in the Japanese camera industry of the 1950s. In early 1958, Zunow made one of Japan’s first modern 35mm SLR cameras with a semi-automatic lens and instant return mirror. Interestingly the Zunow 35 and the Yashica Pentamatic 35 (Yashica’s first 35mm SLR –  1959) share a related look and design style that goes beyond coincidence. More on this in another post.

Back to Zunow Optical and the possible connection to the Lynx. Below is an example of a very similar looking f/1.8 4.5cm lens from Zunow made in about 1959 and was fixed to the Neoca-SV. 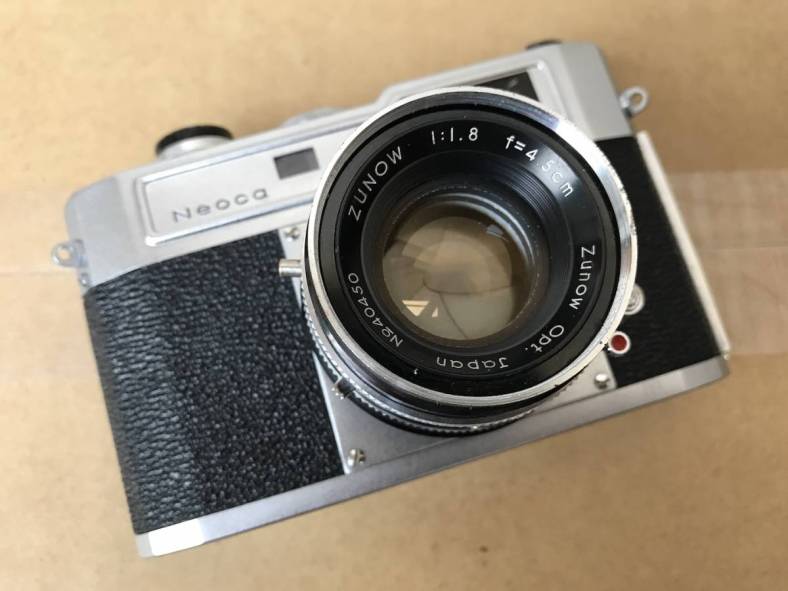 Zunow f/1.8 4.5cm lens on the Neoca-SV. Compare the lens ring font with the font on the Yashinon lens pictured earlier in this post. To us, these were made by the same manufacturer.

One of the biggest clues for us that some of the Japanese bloggers claim that Zunow and Tomioka made the lenses for the Lynx are the similarities of the serial number fonts. The lens with the serial number No 40450 (Zunow pictured above) is in the same style as the serial number on our Yashinon lens (No359708). We have another Lynx headed our way with what we feel is a Tomioka version of the lens. We’ll take both lenses apart to see if there are differences in the design.

Thanks for stopping by! If you have additional information about anything we’ve blogged about please feel free to contact us. We’re never too old to learn something new!

Zunow? lens of the Yashica Lynx.

Amelia Island is a barrier island located in extreme northeast Florida along the Atlantic Ocean. It’s about 13 miles long and about 2 miles across at the widest point. The forest extends north-south along almost the entire length of the island – broken in only a few areas where roads pass through running from east to west. We locally call this strip of trees the greenway.

For about 72 hours prior to the arrival of Irma (well west of us and a tropical storm by then), a strong nor’easter had set up over the region producing almost continuous rainfall and sustained onshore winds of at least 20-30 mph with some gusts into the 45 mph range. Irma added heavy squalls into the equation as a major feeder band moved northward up the Florida east coast. For nearly 36 hours, our maritime forest and coast were battered by onshore winds of sustained 45 to 55 mph with frequent gusts to the low 80 mph range.

The effects of this persistent onshore wind took a heavy toll on the forest islandwide – numerous trees down, branches twisted off and thousands of tons (yes tons) of leaves lost.

In our own backyard, which is part of the forest, we lost numerous branches and a crazy amount of leaves. No trees down but in our small neighborhood many large oaks were felled by the strong winds (and soaked ground). It’s been almost 3 weeks now since Irma and some of the trees in our yard are showing the effects of the whipping winds.

It looks like a typical autumn day (above) but the bald cypress trees here don’t change color until late November and generally don’t lose their needles until mid December. The color change reflects dead and dying needles on the branches.

A closer look (above) shows many bare spots where the needles were simply stripped away from the branches.

A large oak blown down during Irma (above).

A rather large oak branch ripped away from the tree (above) in the persistent winds of Irma.

Our house is just about 800 meters away from the ocean… we don’t usually get heavy salt spray here but we did during the nor’easter and Irma. I’m sure some of the color change in the cypress trees has something to do with the spray and wind.

The trees will recover. They took this same type of beating last October during the passage offshore of Hurricane Matthew.

Encore azalea in the side garden. Celebrating the warm September sunshine. 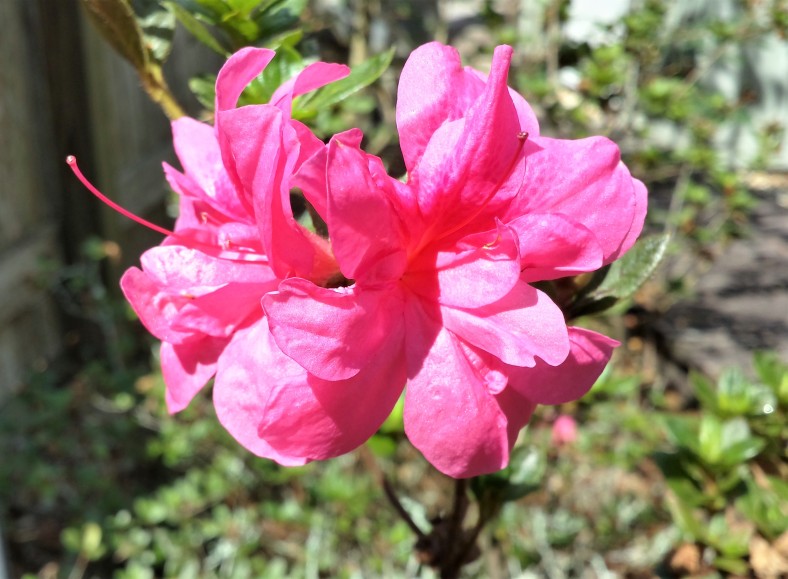 Have a peaceful day! 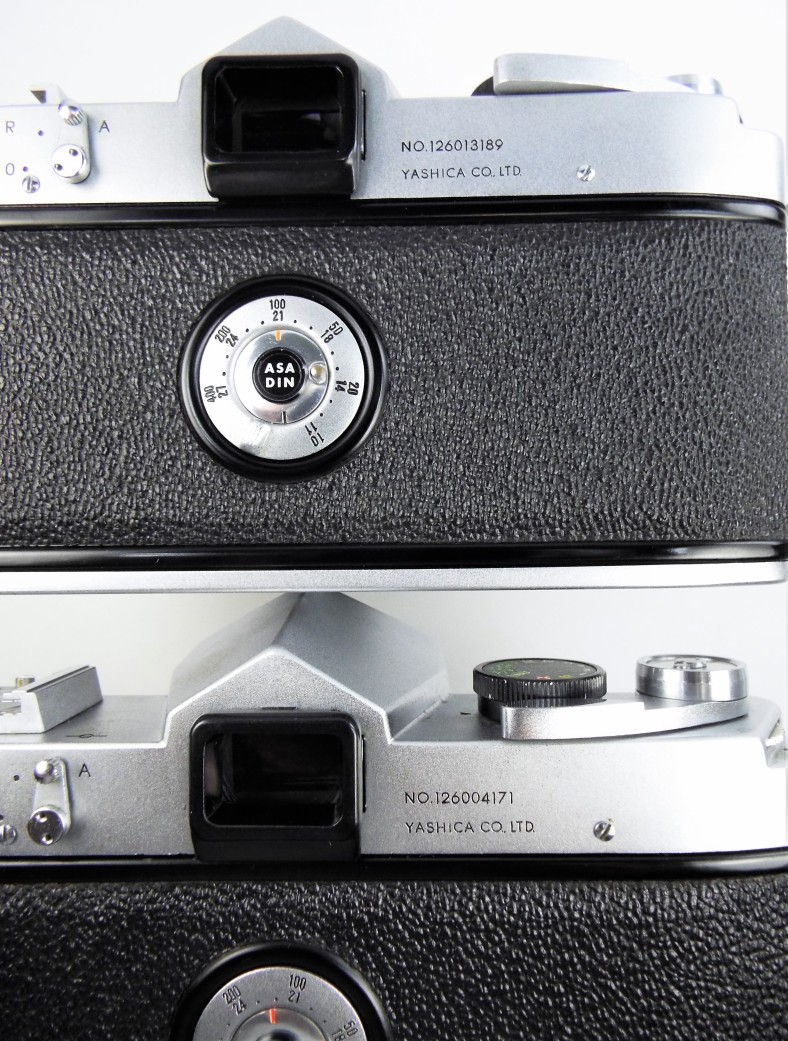 So both of the cameras were in production at the same time in the same factory. We’re highly confident in our analysis of the serial numbers. We have enough examples in our database and enough experience in decoding Yashica serial numbers to say that we are 100% correct.

The whole process of releasing the Pentamatic II was rushed – the top plates were only slightly modified to accommodate squeezing in the “II”. The engraving was moved about 1 mm to the left so as to have room to engrave the “II”. On the back of the camera it only took a change in the serial number engraving to reflect the P2.

The Pentamatic II didn’t get any upgrades to the body… no self-timer and no hot shoe. The lens is a totally different lens and we’ll cover those differences in our next post.

A favorite of mine to photograph – the interior of our c1911 post office here on Amelia Island. For the most part it’s survived its 115 year plus history pretty much intact. I’m told that this is exactly the same way this door has looked since 1911. Amazing.

Beautiful quartersawn oak – excellent casework and attention to detail. Can you imagine replicating this today?

After years of searching, we’ve finally acquired our first Pentamatic II. A rather rare camera that was only released in Japan and only for a short time. It’s estimated (by us) that less than 6,000 bodies were made. How many of those survived to the present day is of course unknown.

Much more detail about this Pentamatic coming soon.

Talented artist with wonderful designs (and colors)! Take a stroll over to her beautiful blog.

Peek-a-boo through the palms – design by Cynthia Maniglia

I’ve hardly scanned any of my hundreds of pictures from our time living in Puerto Rico – 1988 to 1991. We lived in a big poured concrete house on top of the highest hill overlooking the Caribbean on the U.S. Naval Base at Roosevelt Roads (Ceiba). Hurricane Hugo (1989) blew out almost all of our windows – we weren’t there as we had evacuated a day before the storm hit. Our belongings were water damaged and our cars were scratched and sandblasted by the fierce winds but we were safe and our cats made it through the storm just fine (interior safe room with plenty of food and water).

We feel for the good people of Puerto Rico. It’s a tough little island and I’m sure they’ll pull through but the recovery will be slow and painful.

Here’s a photo I did find on my PC. It’s me getting ready for a dive at one of our favorite swimming spots on base. 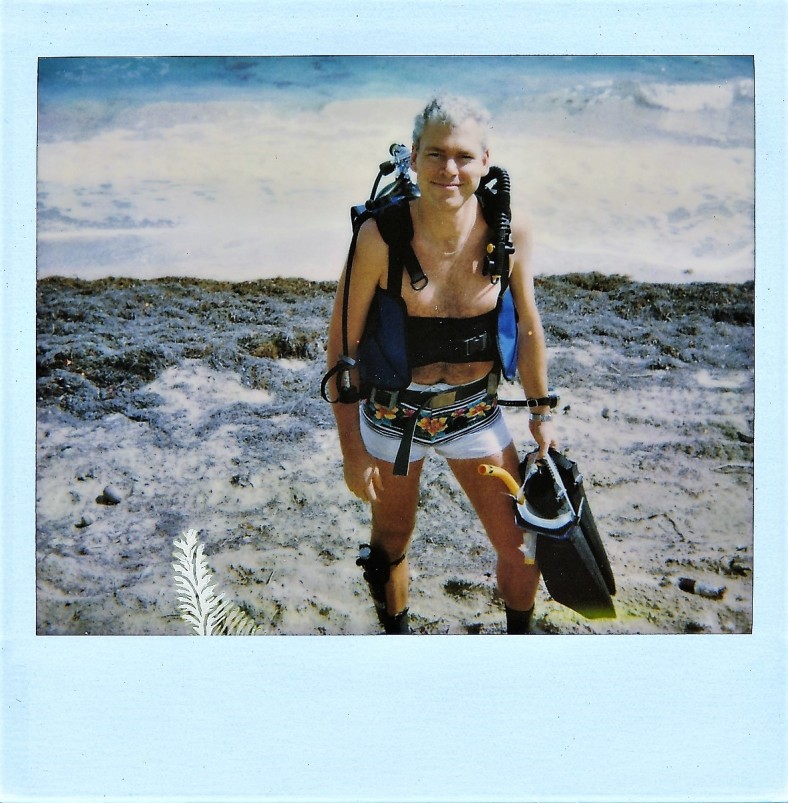 Our house is circled in blue with the line underneath. This area was known as Nimitz Drive and was senior enlisted base housing. It looks like the forest (jungle) has taken over. 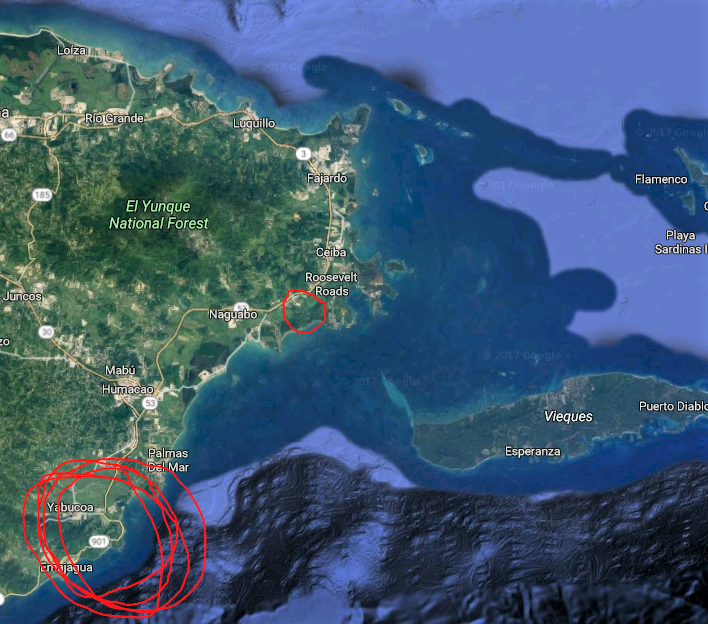 Large scale view of eastern Puerto Rico. Our house was in the small red circle. We could easily see the island of Vieques from our upstairs windows. The large red circle is where Hurricane Maria made landfall.

In response to this week’s photo challenge – layered. 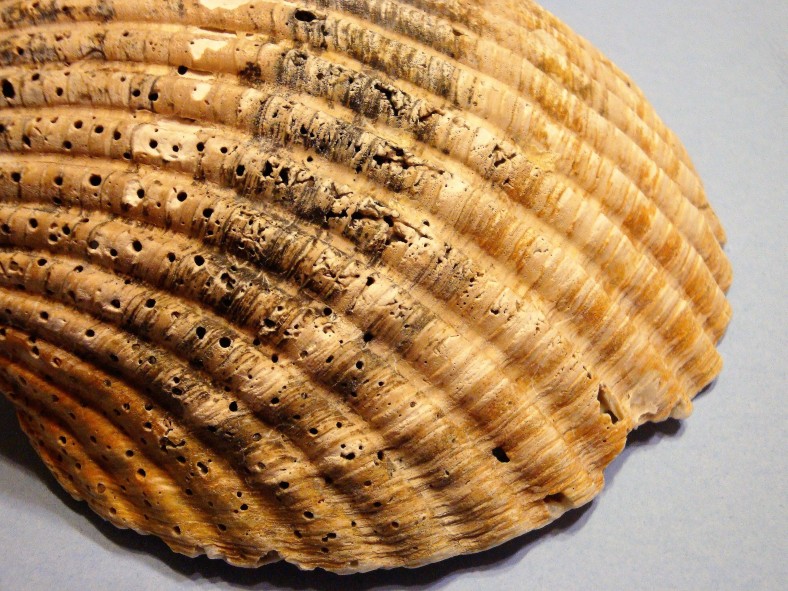