Amelia Island is a barrier island located in extreme northeast Florida along the Atlantic Ocean. It’s about 13 miles long and about 2 miles across at the widest point. The forest extends north-south along almost the entire length of the island – broken in only a few areas where roads pass through running from east to west. We locally call this strip of trees the greenway.

For about 72 hours prior to the arrival of Irma (well west of us and a tropical storm by then), a strong nor’easter had set up over the region producing almost continuous rainfall and sustained onshore winds of at least 20-30 mph with some gusts into the 45 mph range. Irma added heavy squalls into the equation as a major feeder band moved northward up the Florida east coast. For nearly 36 hours, our maritime forest and coast were battered by onshore winds of sustained 45 to 55 mph with frequent gusts to the low 80 mph range.

The effects of this persistent onshore wind took a heavy toll on the forest islandwide – numerous trees down, branches twisted off and thousands of tons (yes tons) of leaves lost.

In our own backyard, which is part of the forest, we lost numerous branches and a crazy amount of leaves. No trees down but in our small neighborhood many large oaks were felled by the strong winds (and soaked ground). It’s been almost 3 weeks now since Irma and some of the trees in our yard are showing the effects of the whipping winds. 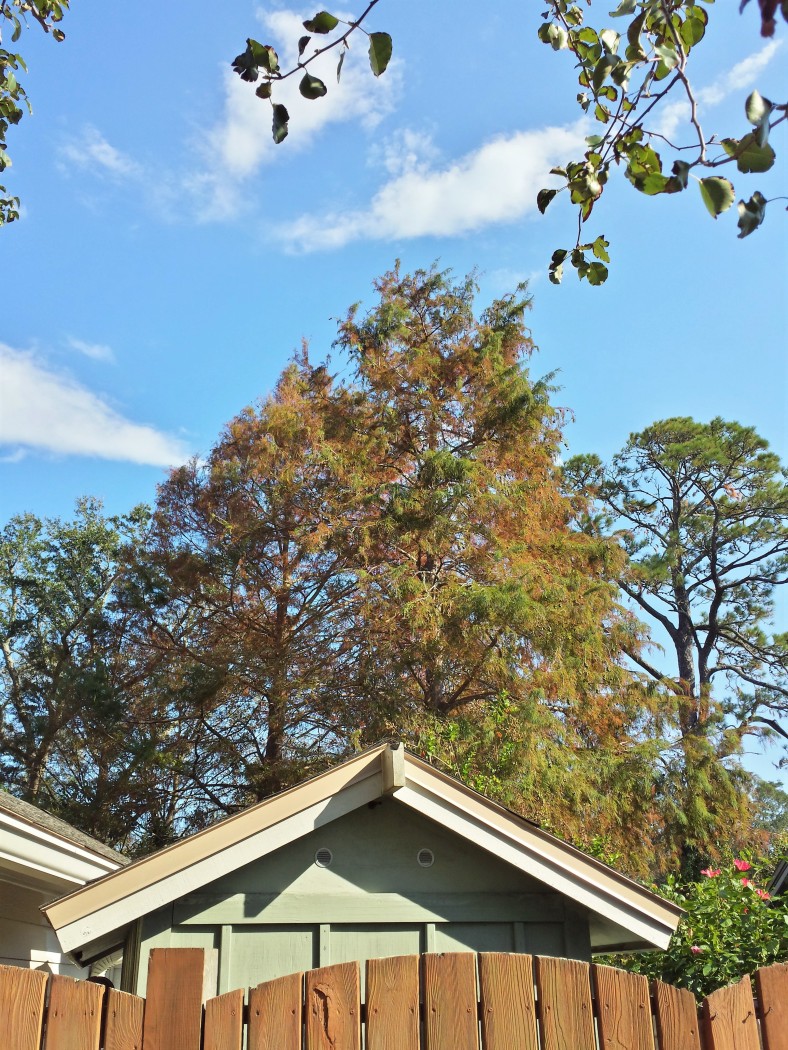 It looks like a typical autumn day (above) but the bald cypress trees here don’t change color until late November and generally don’t lose their needles until mid December. The color change reflects dead and dying needles on the branches.

A closer look (above) shows many bare spots where the needles were simply stripped away from the branches.

A large oak blown down during Irma (above).

A rather large oak branch ripped away from the tree (above) in the persistent winds of Irma.

Our house is just about 800 meters away from the ocean… we don’t usually get heavy salt spray here but we did during the nor’easter and Irma. I’m sure some of the color change in the cypress trees has something to do with the spray and wind.

The trees will recover. They took this same type of beating last October during the passage offshore of Hurricane Matthew.