Yashica’s first ever* black body 35 mm single-lens reflex camera from 1962. The J-3 was an amazing camera for Yashica… it was the first with a CdS exposure meter that was coupled to the shutter speed dial. Still not through-the-lens (TTL) metering but that was coming… shortly!

We are amazed that this camera has made it this far in life and the factory paint is as gorgeous as ever. Sure there are some spots that show some brassing and a ding or two but that only proves it was used.

It still performs as designed… the film advance is silky smooth and the distinctive Yashica shutter and mirror sound remain sweet (as only a 35 mm SLR can sound). If you ever get a chance to acquire a working J-3 do so. It’s a wonderful film camera.

*As best as we know! 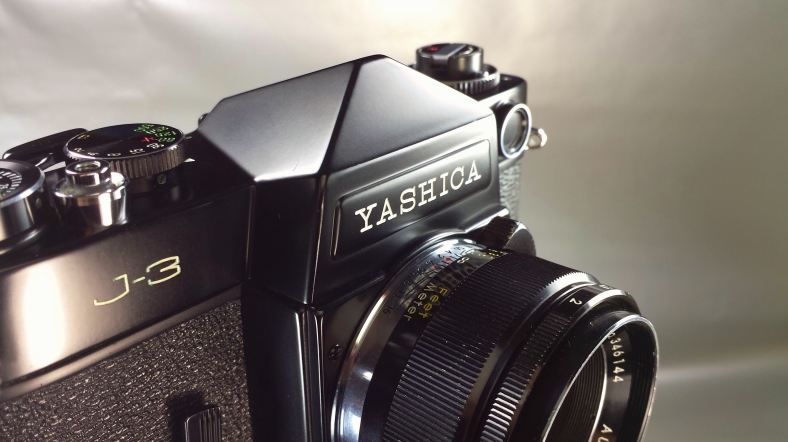 Another advertisement from Japan for the Pentamatic recently came to our attention. I love that in the beginning, Yashica appeared to not know what to call their first ever 35 mm single-lens reflex camera. This first ad below is from a US photography magazine and it referred to the camera as the Pentamatic ’35’. The second ad below is from an English language newspaper printed and distributed in Japan. I’ve seen similar ads like it for other Yashica’s and the price was given in yen. I don’t see a price in this ad and it’s rather small to see much detail but I think it’s important just the same. Although they just title it as the Yashica Pentamatic they are quick to point out that it is an automatic 35mm reflex as if you wouldn’t know by looking at it. 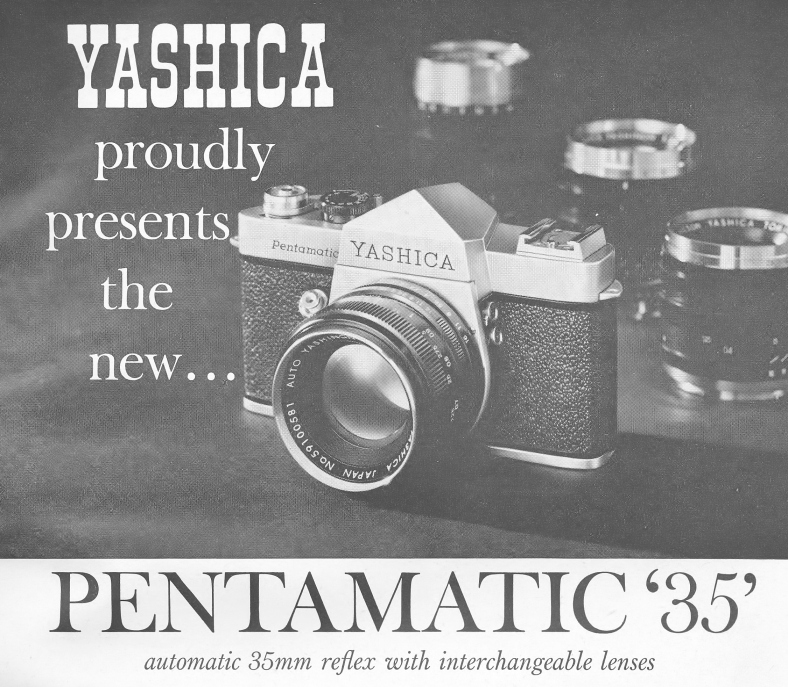 First advertisement for the new Pentamatic in a US magazine. June 1960. 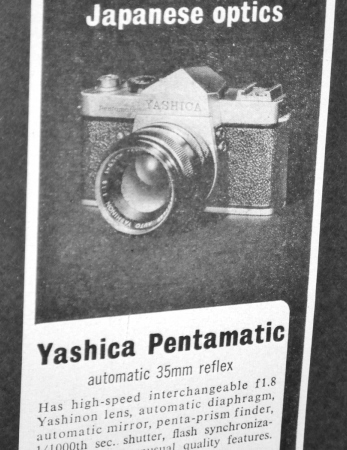 Advertisement from an English language newspaper distributed in Japan.

A wonderful find in our world of Yashica collecting that we would like to share. We’re thinking this coat is from maybe as early as 1965 but more likely from 1968 to 1972. It’s always difficult to put an exact date on marketing items as sometimes they will appear again after the initial release. We thought the coat reminded us of something Doc would have dressed Marty McFly in in the 1950’s with the electron symbol and all. Maybe something Doc would have worn as a lab coat from time to time.

Anyhow it’s now part of the “silly stuff” that we’ve collected along the way. The original black sash or belt was with it too. Nice condition overall given the years its passed through. Of course ‘Sailor Boy’ had to be included. 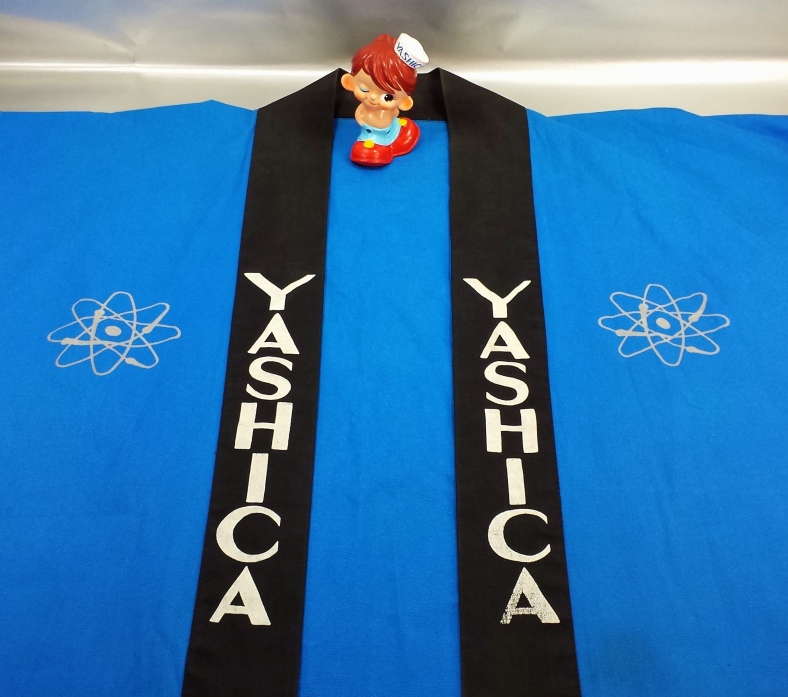 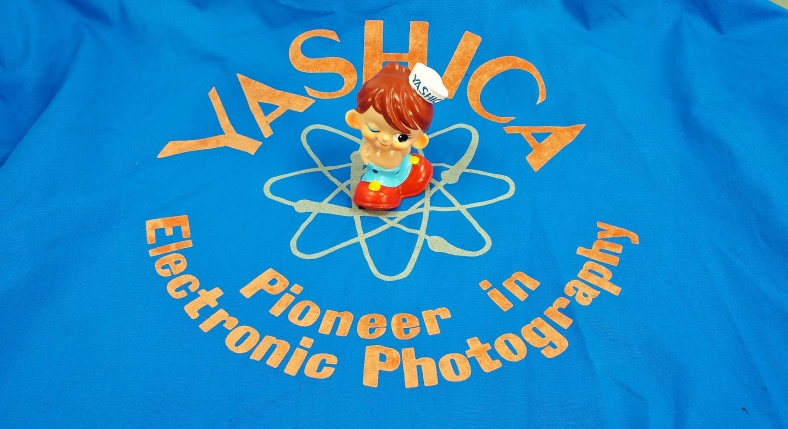 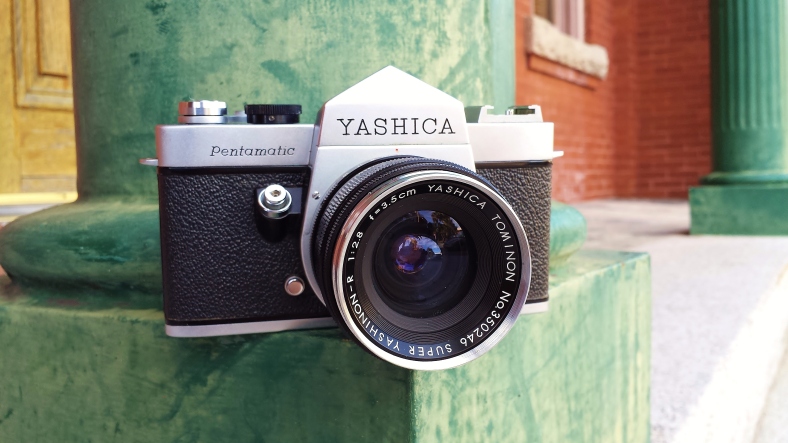 One of our favorite images of the Pentamatic. Taken on the steps of our historic courthouse. This one includes the rather rare Yashica / Tomioka lens. Offically one of just a few made this way. Super Yashinon-R 35 mm lens (f/2.8) with Yashica Tominon markings. Serial numbered as 246… I believe of only 500 made.

Yashica Pentamatic… from 1960. The box was unlike any that had come before it. Simple with clean modern lines and well designed too. At this time, Yashica was producing mass quantities of high quality TLRs, respected 35 mm rangefinder cameras and they were big into 8 mm movie cameras and projectors. Yashica arrived in the already crowded Japanese 35 mm single-lens reflex market a bit late. Minolta, Asahi-Pentax, Nikon and others were already establishing a reputation for innovation and quality but at a considerable price for the average photographer. Yashica’s SLR would have to stand out in some way to get noticed. The engineers and designers came up with a typical Yashica innovation… build a high quality 35 mm SLR but make it affordable for the masses. So the Pentamatic was born. Different to be sure… unique bayonet mount for the lenses that were made by Tomioka Optical to Yashica’s specifications. Leave off the built-in self timer. No built-in exposure meter either. It worked to a point. The camera with the standard lens came in just under $160 in the US. Add the leather case for another $10 and if you really needed a self timer there were plenty to be had that would screw into the shutter release button. The Pentamatic camera and its unique bayonet lenses only lasted just under two years before the Penta J appeared. The Pentamatic was well liked but with no built-in exposure meter and a limited choice of lenses its time would be limited. But from the leap to the Penta J and its M42 universal screw mounted lenses thing happened quickly for Yashica after that. The J-3 would come along in 1963 and have many of the Pentamatic’s shortfalls incorporated in a sleek new body and an almost unlimited array of lenses. 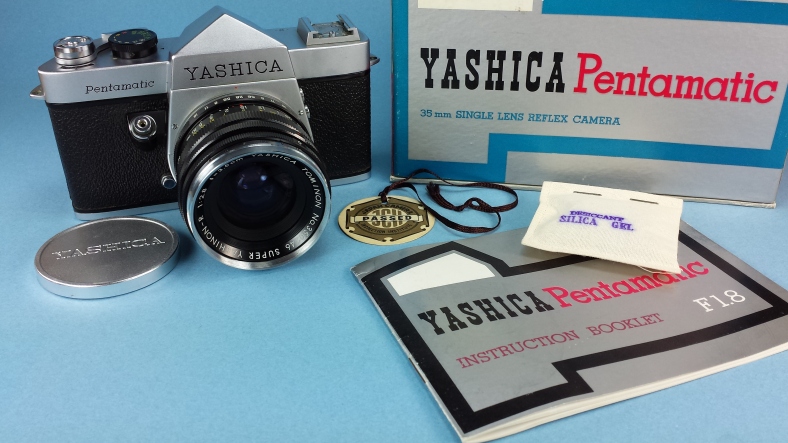 From 1960. The clean simple lines of Yashica’s first SLR.

Fun image of our classic Yashica Pentamatic S from 1961. Our “friend” is a statue in the historic district of our town.

We’re always trying to find some consistency in the dating of Yashica publications. If you are a collector of all things Yashica (and Yashima) you know the frustration of not knowing when a brochure or instruction booklet was printed. Dated advertisements are a good source for dates but the lead times are often anywhere from 1 to 3 months prior (or longer) to the published date of the magazine. Through research and in some cases just plain good luck, we’ve recently spotted a trend in the date codes that occasionally appear on publications from Yashica.

We are very lucky to have in our collection a complete set of matching books from Yashica in both English and Japanese. These books came with our TL ELECTRO-X ITS that was purchased in September 1973 in Okinawa. We also have the original sales receipt from that purchase as well. The two ITS instruction booklets (English & Japanese) have the following date codes… English version 730105 and 47.6.5 for the Japanese version. The two Yashinon Lenses & Accessories booklets have date codes… English version 730410 and 7301 05 3 for the Japanese version. It is interesting that one date is in the Showa format on the Japanese version of the ITS booklet and the other Japanese booklet uses a slightly different code with an extra space in it (7301 05 3). To convert the Showa date you simply add 25 to the year and that would make it 72.6.5. All the dates precede the sales receipt (SEP 1973) so that’s a good thing.

We recently acquired two new Yashica sales brochures printed in Japan in English. The cameras depicted in the brochures are from the early to mid 1960s and many of the cameras have known “release dates”. The brochures are fold outs and are almost exactly the same in layout and style (size too). The only difference is in the date codes. The 35mm brochure has 642-2-HY and the TLR brochure has 638-3-OM. Since we know the release dates on some of the cameras in the brochures, it makes it easy to cross reference the codes as being dates. So 642-2-HY is February 1964 and 638-3-OM is August 1963. Hope our theory holds up as more brochures are compared (it will as I’ve taken a quick peek at some of the late 1950s and early 1960s brochures). 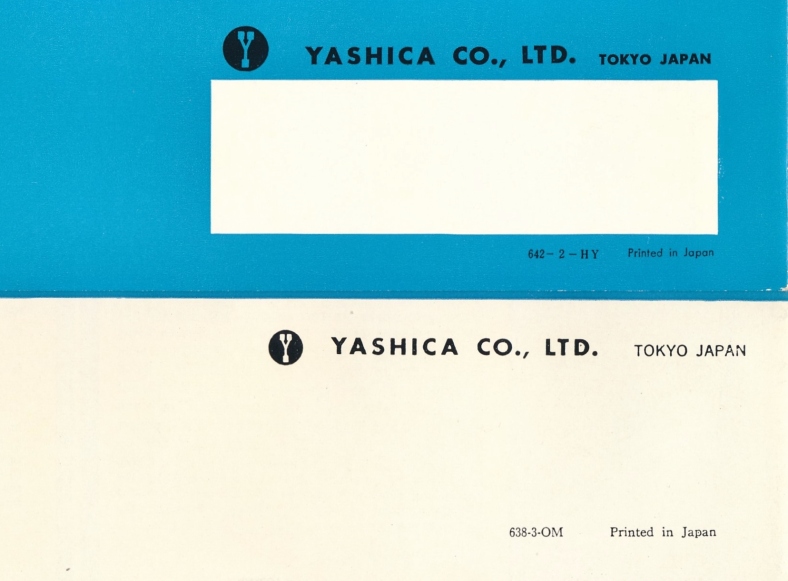 The top scan is the 35mm brochure and the bottom is the TLR brochure. 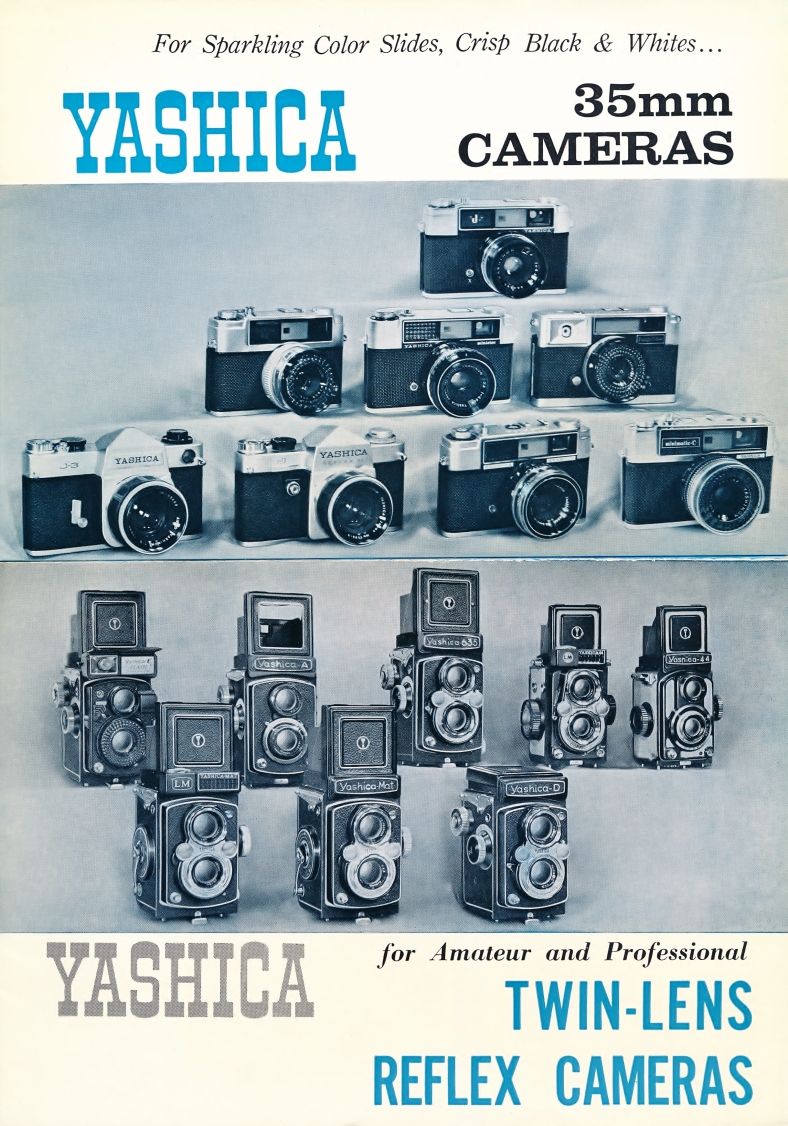 Yashica produced more than just cameras during its boom years. As a leader in the field of electronic photography in the middle to late 1960s, Yashica’s early electronic devices ranged from such diverse items as transistor radios, record players, movie projectors, editing equipment and tape recorders to name but a few.

Most of the earliest electronic devices are rather rare now (as one would expect after 50 years) and only occasionally does something come up in auctions both on the web and in estate sales. I suspect that the more common electrical items such as projectors and editing equipment are still flooding eBay and other on-line auction sites.

Finding an early radio such as the YT-300 and YT-100 is a bit harder. Here we share some of what we’ve been able to collect over the years. 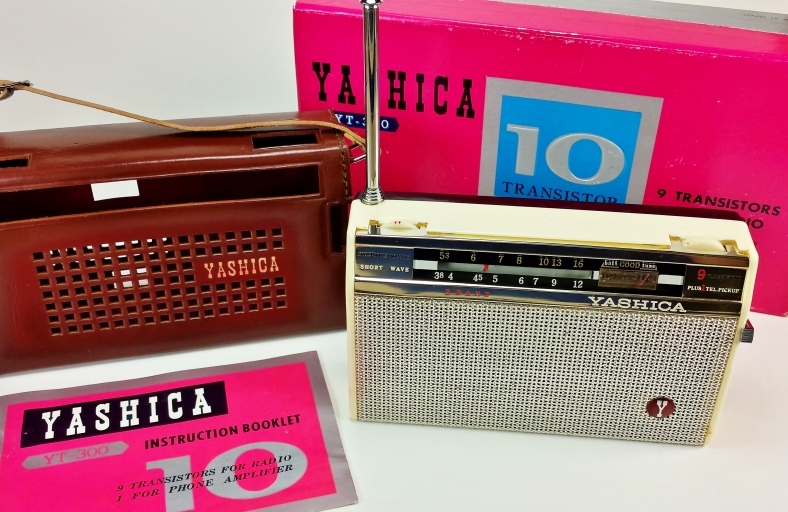 Nice complete set from around 1960. 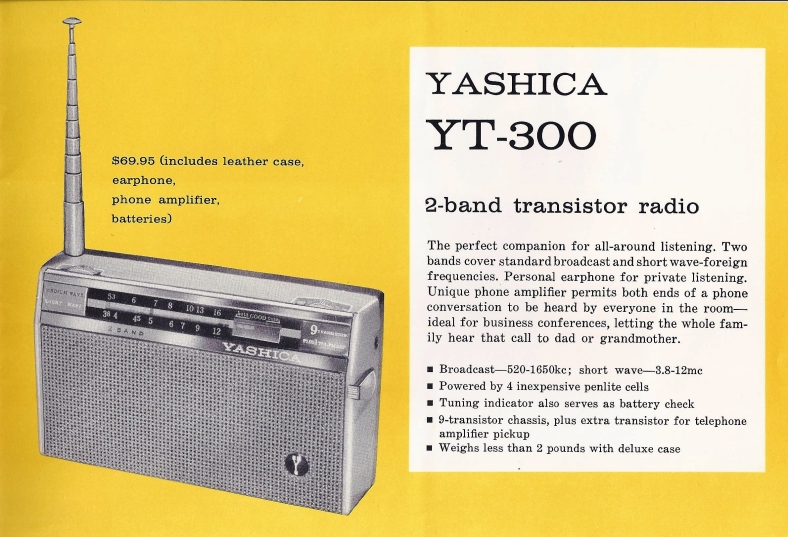 Not a bad price for such a sophisticated radio. 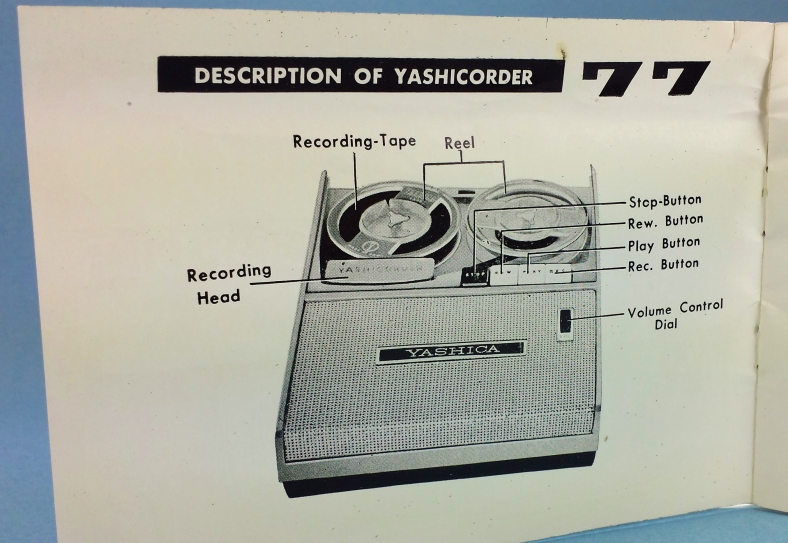 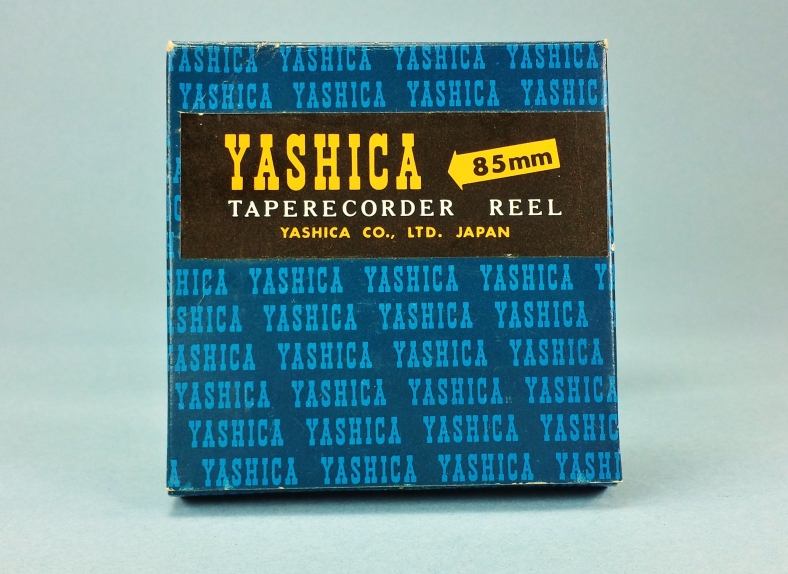 Yes Yashica even branded their own magnetic tape for their recorders. 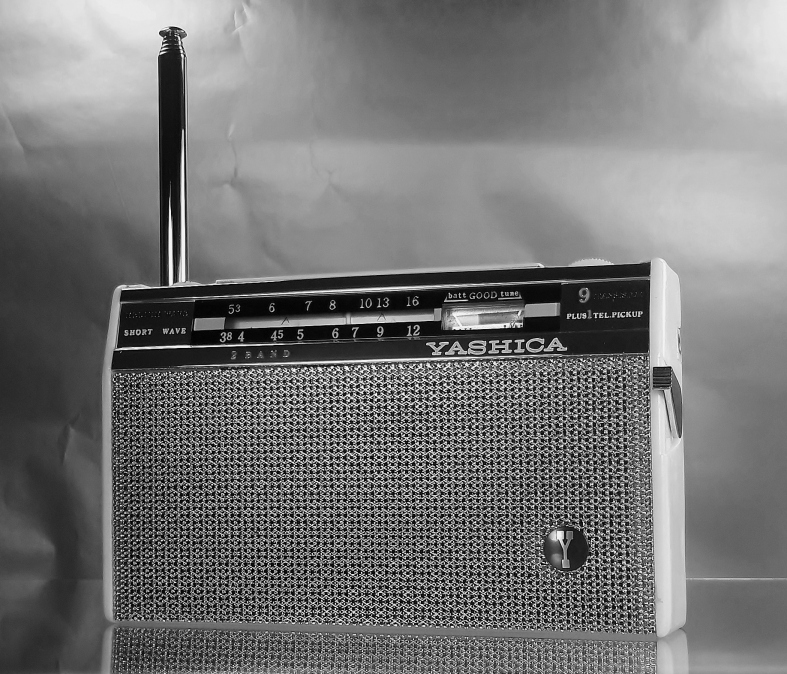 Yashica YT-300 portable transistor radio. Designed in late 1959 it was very popular in the early 1960s and was one of the many electronic devices that helped Yashica develop their hyper successful electronic cameras that followed. 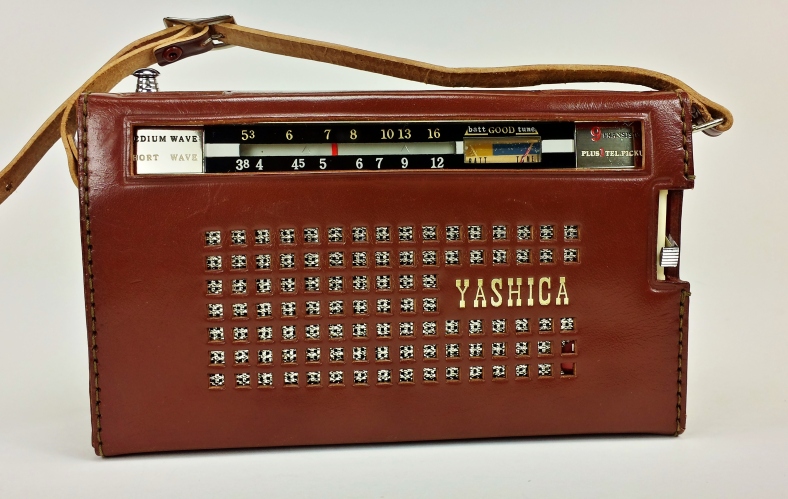 Yashica YT-300 in its very elegant leather case. The case itself is a work of art and craftsmanship.

Thanks for your visit! If you come across a working Yashica radio or tape recorder snag it! They’re really rare and a fun little reminder of the first transistor radios and how cool they were.

Nice advertisement from Yashica for Christmas 1959. This same model was used in at least four other ads from Yashica in late 1959 and early 1960. She was a very busy lady to be sure. We haven’t seen her in a Japanese sales brochure as of yet but we wouldn’t be surprised if she was. Most of our collection of vintage Yashica sales brochures come from this very prolific marketing period. Between 1958 and late 1960, Yashica was introducing a wave of new cameras and as in this case a transistor radio (YT-100). 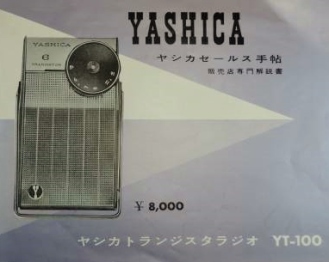 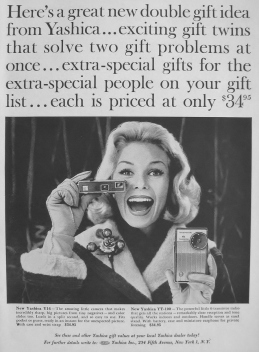 This very nice looking lens hood might be one of Yashima’s first to carry the Yashica name in the “squished” oval design. It’s a 32 mm metal push-on type designed to simply slide over the taking lens’ chrome ring. The case is a very mellow brown… the stiching is more or less taupe and the snap is orange-brown. The inside has the typical red felt on two sides and natural leather elsewhere. The case and hood may be from early 1956-ish. It’s fitted to our c1954 Yashicaflex AS-II. A later Japanese sales brochure from 1959 has the hood listed for only ¥230 and it’s with the Yashica A III. 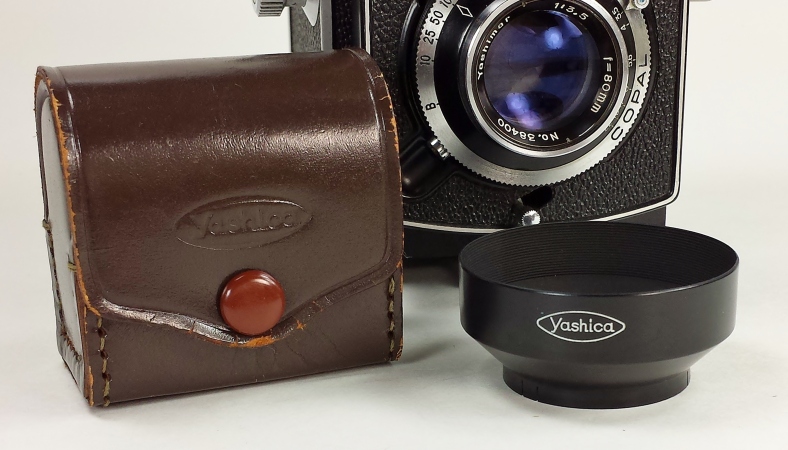 Yashica lens hood from early 1956 or so. 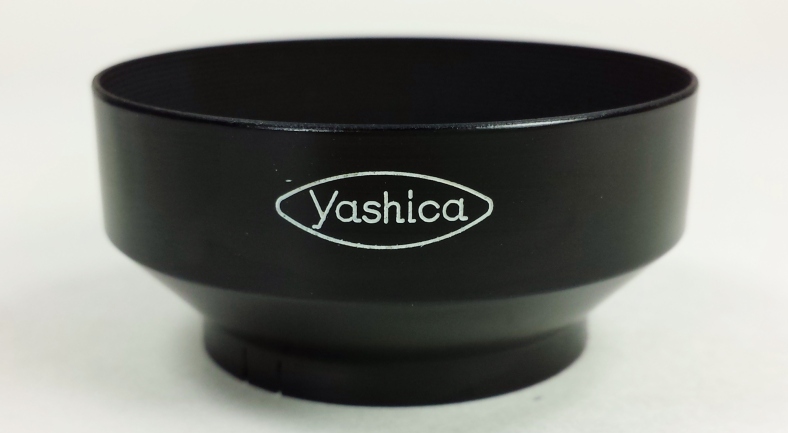 Close-up detail of the metal hood (32mm) push on type. 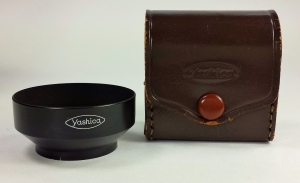 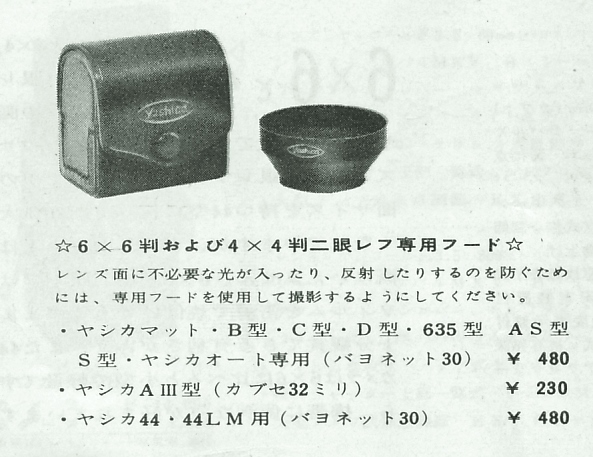 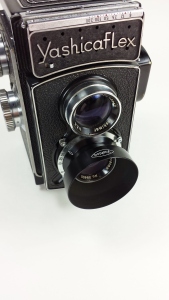