We recently came across this sales brochure (catalog actually) for Fujifilm. Straight from Japan (Kanagawa Prefecture) to our blog! Hard to date some of these brochures as they almost never had dates or even some type of a date code. Our guess on this one would be 1955 or so based on the design of the film boxes. We could be wrong so please correct us if we are. 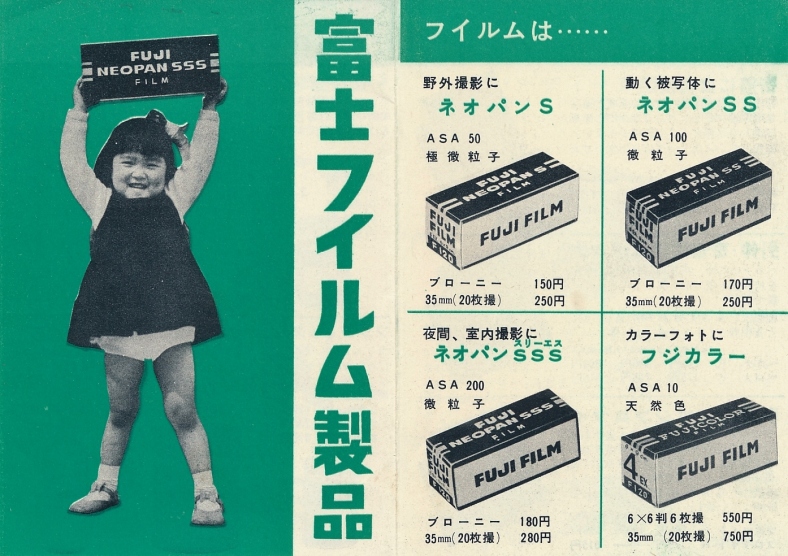 “Cute” ad from Fuji Film. Along the same lines as the early Coppertone ads.

Check out the ASA 10 Fujicolor film box. It had better be really really bright out and during mid day to get away with ASA 10! Below is a scan from the inside of the catalog. Great looking camera! 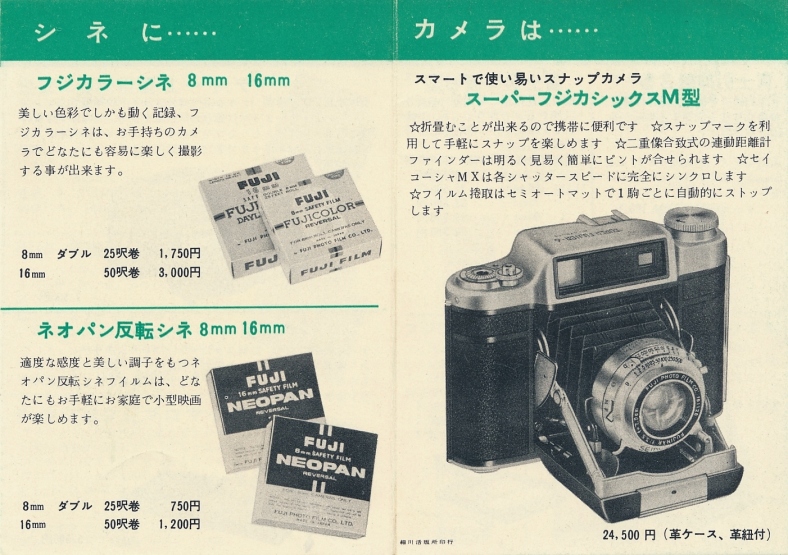 The super small kanji to the lower left of the camera image translates to ‘Hosokawa Letterpress Office Inko.

How does this relate to Yashica? Not directly really but some of our early Yashica instruction booklets feature Neopan film in the book.

From the July 1960 issue of Modern Photography magazine. What we find most interesting in this article can be found in the opening paragraph. Describing the Pentamatic as a “relatively small, lightweight, quiet-shutter single-lens reflex incorporating a number of features found only in cameras costing a good deal more.” Interesting that the reviewer did not mention that this was Yashica’s first ever single-lens reflex camera. It would seam important to the reader as Yashica had a reputation of building fantastic twin-lens reflex cameras and some beautiful rangefinders. Our guess is that compared to the other cameras that were available in early 1960, one could say that the Pentamatic was small and lightweight. Pick up a Pentamatic with the standard f/1.8 5.5 cm lens, and by today’s standards, it’s anything but small and lightweight! We do agree however that the Pentamatic has a quiet shutter and the price was certainly good compared to the other SLRs. 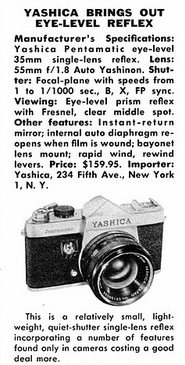 From the July 1960 issue of Modern Photography magazine.

The specifications were supplied by Yashica from the official press releases during the March-April 1960 time frame. The entire article was written from that information with what appears to be a very brief test of the camera. No mention of the quality of the images taken with the Pentamatic other than to say that the normal lens produced little to no significant fall-off of edge sharpness at full aperture (f/1.8). The reviewer did state that the chrome finish wasn’t too good but that another technician liked it just as it is.

The Yashica Flex model S (aka Yashicaflex) is one of Yashima’s most important early cameras… well maybe the second most important behind the first. Obviously Yashima’s first camera, the oddly named Pigeonflex one could argue, was the most important. The model S though was the first twin-lens reflex (TLR) camera (in the world!!!) that had a “built-in” exposure meter. 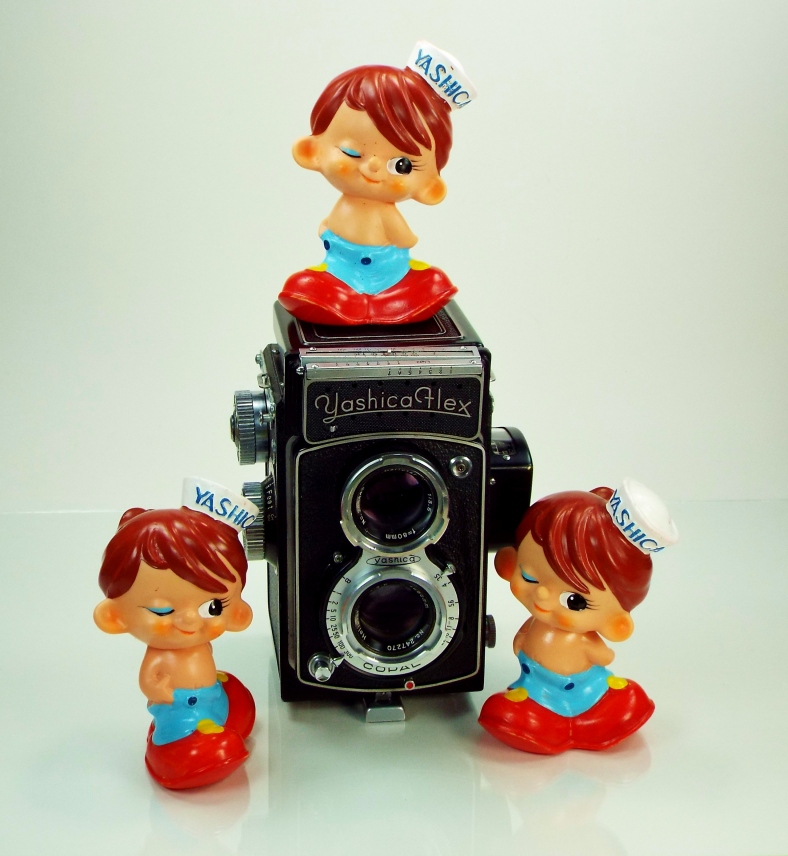 The Yashica ‘Sailor Boys’ gather around the Yashica Flex model S. The boys are from 1962 and this TLR is from late 1956.

The Sekonic CB-1 exposure meter was attached to the camera’s left side and the light gathering cells were located under the nameplate flap. They were connected to one another but the meter was non-coupled to the camera settings. The user would lift the flap to expose the cells to light and then read the exposure index in the window on top of the meter. Then simply set the camera to the proper f-stop and shutter speed and snap away. No batteries required. But with the passage of time most of these meters failed in some way or another. If you find one with a working meter so much the better. 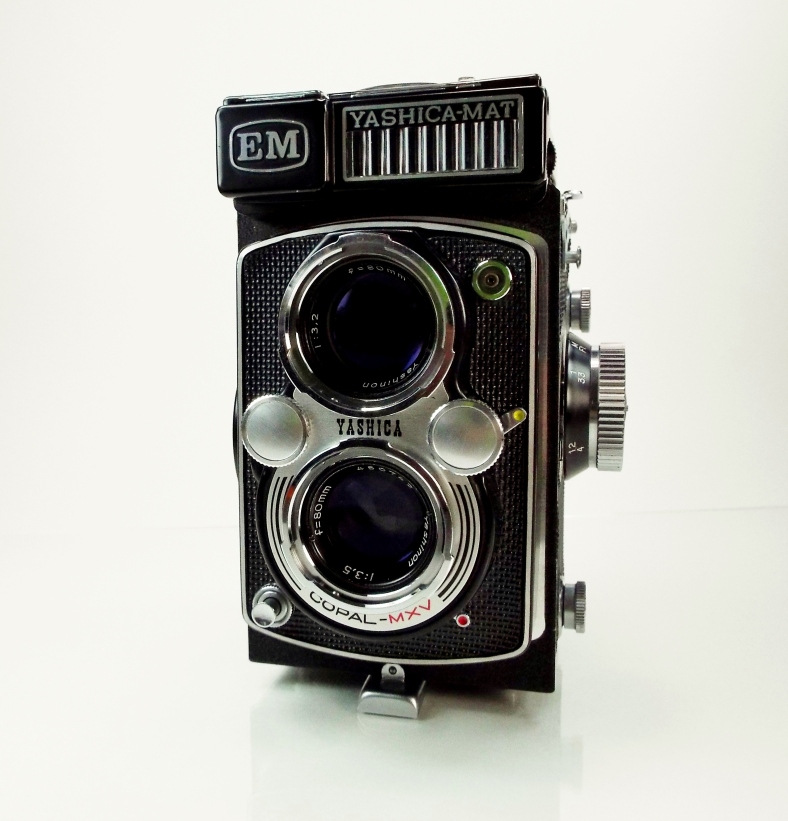 Yashica-Mat EM from 1964. The exposure meter and light gathering cells were moved to the front and top… no more flaps to raise and we were a bit closer to being coupled. This EM has a working exposure meter which is pretty amazing after 50 plus years! 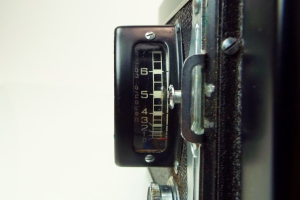 Close-up of the Sekonic CB-1 exposure meter on the Yashica Flex S. 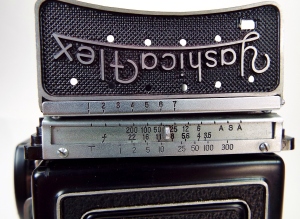 Exposure meter scale for setting the f-stop and shutter speed. 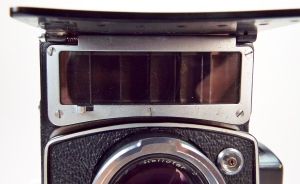 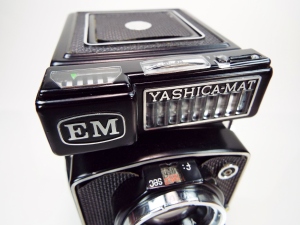 Exposure meter on the Yashica-Mat EM. 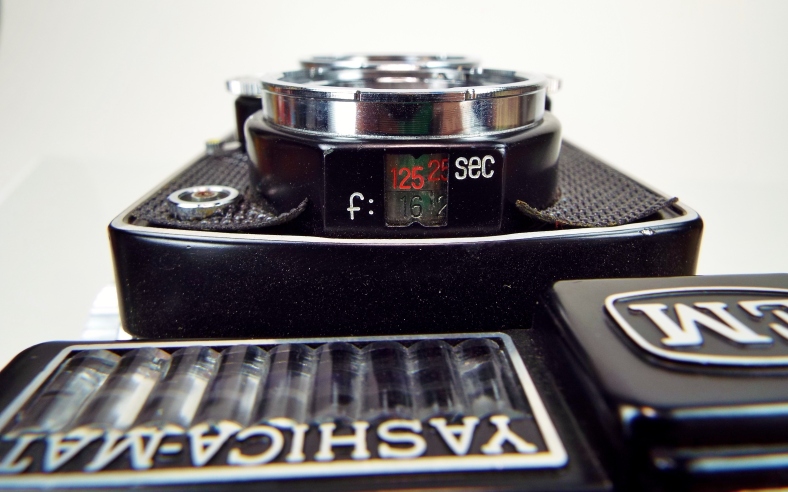 Close-up view of the aperture and shutter speed settings on the EM. 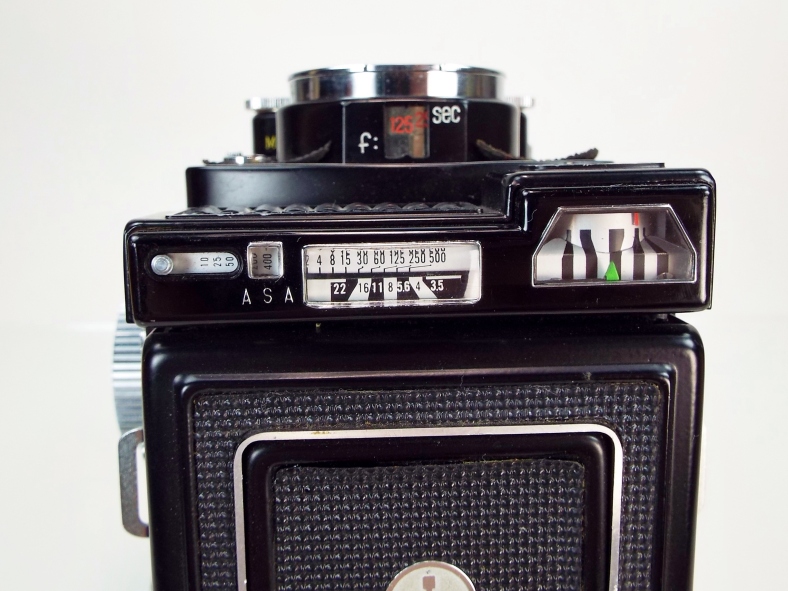 So there you have it… a short (very short) history of some groundbreaking cameras from Yashima/Yashica. For more on Yashica’s awesome array of TLRs visit my friend Paul’s site at http://www.yashicatlr.com

Paul’s site is a labor of love and if you want to know anything about Yashima/Yashica that’s the place. We hope to bring some more Pentamatic blogs your way soon. We are of course, The Yashica Pentamatic Fanatic!

Often the design of such a simple thing (here a box) can tell much about a company, its history and its growth. Yashima (later Yashica) was founded in 1953 in a then very crowded Japanese camera market. The Japanese people were urged by the American occupation authority to essentially grow technology industries so that the country could earn some much needed currency. By producing sophisticated products such as cameras that would appeal to foreign markets, Japan would strengthen the yen against other currencies and offset some of their imports of raw materials, oil and food.

How does this relate to boxes? It doesn’t directly but it does show that at least one company (others did it too) was a serious player in the dynamic camera industry of the early 1950s. Yashima had to show the world that although their cameras (mostly TLRs) were inexpensive, they were of the highest quality. The construction of such a simple thing as a presentation box had to stand out among the other manufacturer’s boxes (mainly those from Germany) and compete for space on camera dealer’s shelves and attract potential buyers to at least take a look at the camera inside. The early 1957 (below on the left) box weighs in at 352 grams empty and the box from 1964 weighs 155 grams. That’s a big difference to be sure. The early box took more time and demanded more material to construct then the simple 1964 box which was printed flat and stapled together rather then glued (think cereal box). That’s a big change and reflects a strong desire by Yashica to maximize its profit in the rapidily changing marketplace of the mid 1960s.

We should point out that by the mid 1960s, Yashica was producing record numbers of twin-lens reflex cameras (TLRs) even as the world market demand for them was decreasing. By 1964 (the year the newer box was constructed) Yashica was producing high quality 35 mm single-lens reflex cameras (SLRs) as well as innovative 35 mm rangefinder cameras and sophisticated 8 mm movie cameras. Before the decade of the 1960s would end, Yashica pioneered the use of electronic photography and the use of “computers” to control exposure and shutter speeds in their SLRs like the extremely popular TL Electro-X. 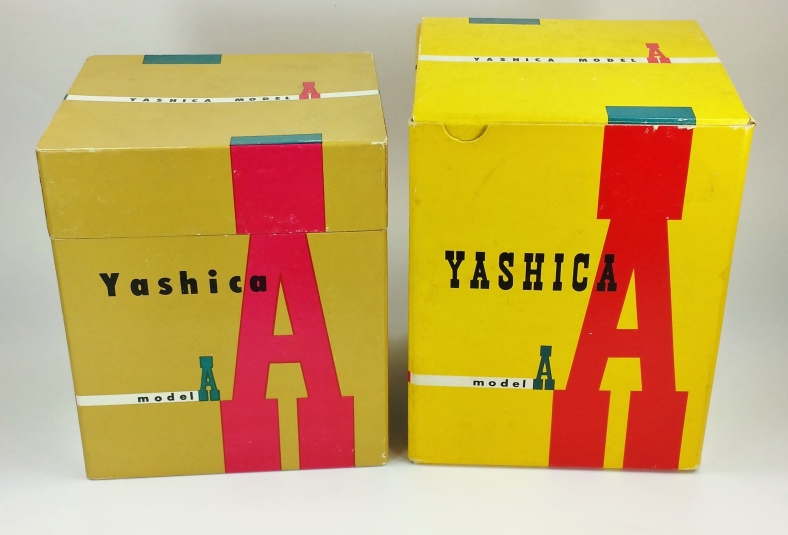 Early 1957 Yashica Model A presentation box on the left and on the right the simple 1964 box. 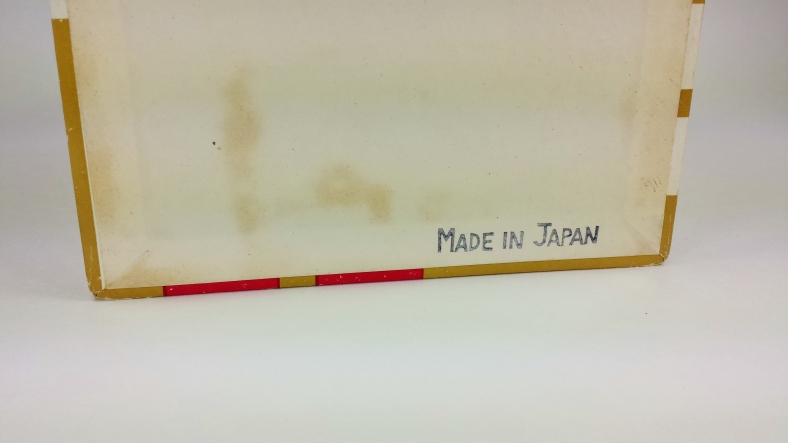