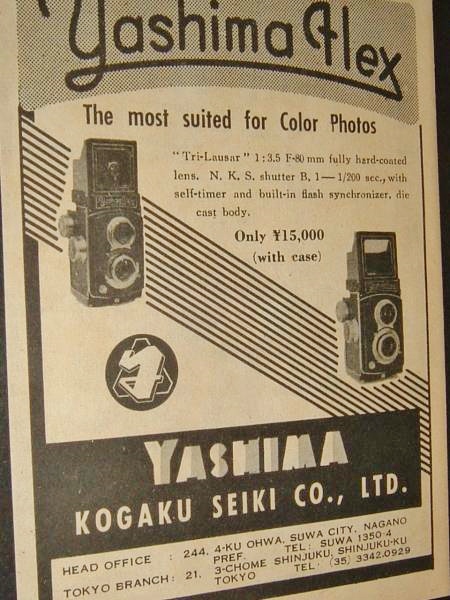 An original advertisement for the new Yashima Flex camera from 1954.

Yashima’s first twin-lens reflex film camera. More correctly, the first camera of any type to carry the Yashima name. Built in 1954 by the good folks at Yashima Kogaku Seiki Co., Ltd. at their factory in Nagano Prefecture. Prior to this camera, Yashima produced a model called the Pigeonflex which at least gave them some great ideas on how to present the camera that would eventually carry the company name. The camera, the presentation box and the leather case all show great attention to detail and a solid foundation that would become the standard for years to come. The sophistication of the first camera would lead to many firsts for both Yashima and the Japanese camera industry as a whole. Yashima would later be called Yashica as that name came to be more recognizable in the crowded marketplace of the 1950s and beyond.

The beautiful styling of all three elements are clearly seen in this rather rare view of a mid production camera kit. The leather case was more than likely outsourced to a supplier and more than likely the presentation box was too. The lenses came from Tomioka Optical in Tokyo and the shutter was a N.K.S. design and build. After nearly 62 years since this camera left Nagano it still functions as new. The only true signs of age are typical of many older cameras in that the leatherette covering becomes brittle and the glue gives up its bond to the metal. A masterpiece of early Japanese engineering and craftsmanship.