After nearly five years of research and thousands of “searches” on auction sites, I finally have my answer! ‘ITS’ as it relates to the famous and groundbreaking Yashica TL E…

Yashica’s three finest cameras in black. The J-3 was the first truly modern 35mm SLR from Yashica and it was their first SLR to be made in pro-black with matching black lens. Only a small amount of the J-3s were black – most were the traditional silver top and black leatherette body. On the far right is the most successful SLR Yashica ever made. Fully loaded with electronic everything, all commanded by its ‘IC’ brain. The next step on the evolutionary ladder is the TL Electro X ‘ITS’ (center). A mostly marketing idea, the ITS was essentially the same camera as the TL Electro X with the added gold ‘Electron’ symbol on the front of the pentaprism and the stylized ITS emblazoned  on the camera’s left front (not seen here but can be seen below). The marketing folks at Yashica never said what the ‘ITS’ stood for (if anything). Our best guess is ‘Integrated Technology System’. Some say ‘Interval Timed Shutter’ as the shutter was electronically controlled and could fire at any speed. Later the Contax-Yashica ‘RTS’ was introduced and it was advertised as ‘Real Time System’ whatever the heck that meant.

We’ve used all three, and the TL Electro X with the white stylized ‘Y’ on the pentaprism is our favorite. It just feels perfect in your hand and the electronic over and under (exposure) arrows in red are easily visible in the viewfinder. 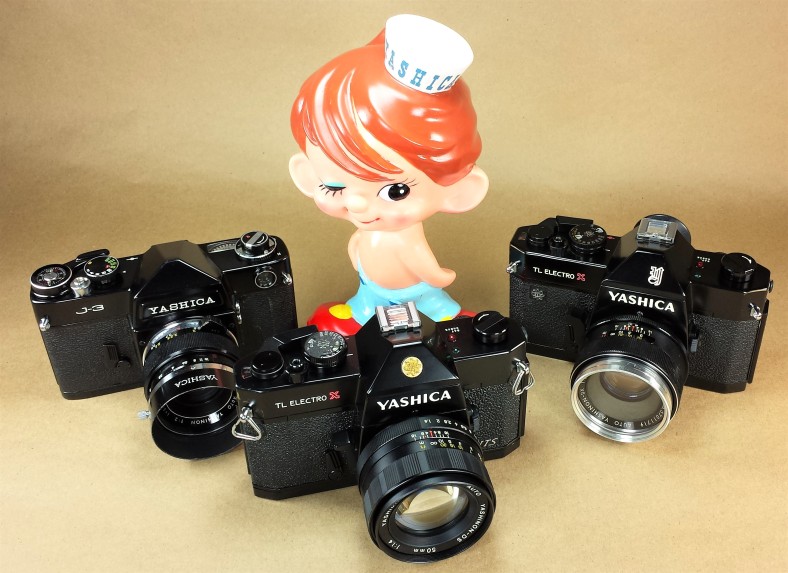 By the way, the advertising icon (Yashica Sailor Boy) was never given a proper name by Yashica. He made his debut in 1962 and still could be found kicking around in sales brochures and ads into the late 1960s. This guy is the 20cm (10 inch) dealer display model and he was in his sealed bag and box from Modern Plastics of Japan when we acquired him. He comes in about 3 other sizes and different styles and colors.