Occasionally we run across a silver 50 cent piece with a hole punched through the top near the edge. Most collectors turn their noses up to collecting these coins as they are considered damaged. We consider them to be desirable little time machines. Here’s why.

First off, these coins were hand struck at the Philadelphia Mint. Hand struck means that a Mint worker (usually women) would load the silver planchet into the die and then turn a wheel that would strike the dies together producing the coin you see above. This totally manual process produced coins that for the most part, were never exactly the same.

What makes holed coins interesting to us (and many others) is that they were holed for a very important purpose – they’d be worn like a necklace and kept hidden from view. In the 1820s, fifty cents in silver could buy some much-needed supplies in an emergency and see the bearer through some desperate times. Furthermore, a coin or coins strung around the neck were less likely to be lost through a hole in a pocket (if they even had pockets).

If you look closely at the hole you can see some bits of fabric (or leather) and dirt in it. Another neat part of the coin is that when the hole was punched it displaced the rim just a bit as the silver deformed (top edge). The coin is well worn on the obverse (the date side) but in the recessed areas, there’s still a trace of the original mint toning which shows as a faint bluish-purple color. Miss Liberty has lost the details of her gown and her bust blends with her clothing. Her cap still shows a strong “Liberty” and there are still some separate strands of her hair and curls showing.  One star (upper right) has its center points still visible.

Here on the reverse of the coin things get interesting. Look closely at the hole – the flattened area around the hole shows that it was punched through and then flattened. This shows that it was punched and not drilled. This side of the coin is more worn than the front which indicates that it rubbed against the clothes or chest of the wearer. There’s still a trace of the colorful toning here and there on the coins surfaces.

Some history of this coin series: Partway through 1807, the Draped Bust series was replaced by U.S. Mint Engraver John Reich’s Capped Bust design. This series shows Liberty donning a cloth cap on her head. The reverse once again displays a smaller eagle, with a shield. Until 1836, the edge featured the denomination, once again inscribed as FIFTY CENTS OR HALF A DOLLAR. Partway through 1836, the coin’s edge was changed to a simpler reeded style. This style remained until the end of the Capped Bust series in 1839.

Another reason that we like these holed coins is that you can only imagine who might have worn it back in the 1820s, 1830s and beyond. Where did this coin travel? Was it around a soldier’s neck during the Civil War? How about in the wild frontier of a pioneer? The possibilities are endless.

Current silver melt value for this coin is less than $7 – numismatically it’s worth way more to a collector but with limitations. We’ve known collectors that collect only holed 50 cent pieces since he found them much more interesting than pristine, mint state coins of the same period (and way more affordable too!).

For more about our coinage, you can visit here. 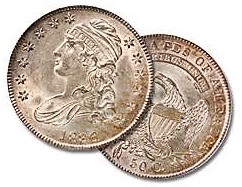 Thanks for your visit and go check out some of our countries early coinage. You may find that collecting a few early examples is a great way to own a bit of our history. These coins (even those with no holes) are actually quite affordable in circulated condition.