The last strip of highway heading north towards Georgia. Up ahead the St. Marys River and bridge – heat radiates off the already hot pavement as a reminder that it’s only Spring – wait ’til Summer.

United States Highway 17 was the life giving link to the Eastern Seaboard and beyond. If you came to Florida in the 1940s, 1950s and early 1960s you crossed that bridge (well one like it but it was a drawbridge then but it’s not anymore even though the sign says it is, whew!) and your first glimpse of the Sunshine State was this patch of pavement. I-95 didn’t exist and it was 17 or nothing in those days. Now it’s only travelled by locals, log trucks or tourists looking for the original Florida. Along this stretch, cheap but nice motels with air conditioning and swimming pools beckoned those travellers that wanted their first taste of Florida and a cool bed. If you were real lucky, you’d spot a gator or two in the wet areas just off the the road.

Distance wise, this is Florida’s first motel – just a half mile from the Georgia line. It closed decades ago, driven out by high speed travel on smooth highways. The doors were closed and locked once – now termites and rot have opened them again. Couples would snuggle together in these rooms while on their honeymoon. Children would run wild through the parking lot waiting for the car ride that would take them to Florida’s first attractions still well south. Now only grass and weeds run wild.

I like coming here… it’s quiet except for the occasional log truck along the highway heading south to the mills and of course the stray local or curious tourist. Not like it used to be – a steady stream of cars spilling across that bridge into the sunshine.

Yep, no trespassing. Trespassers will be stung or bitten – wasps and fire ants do the enforcing. No tourists – just bugs, heat and photographers. 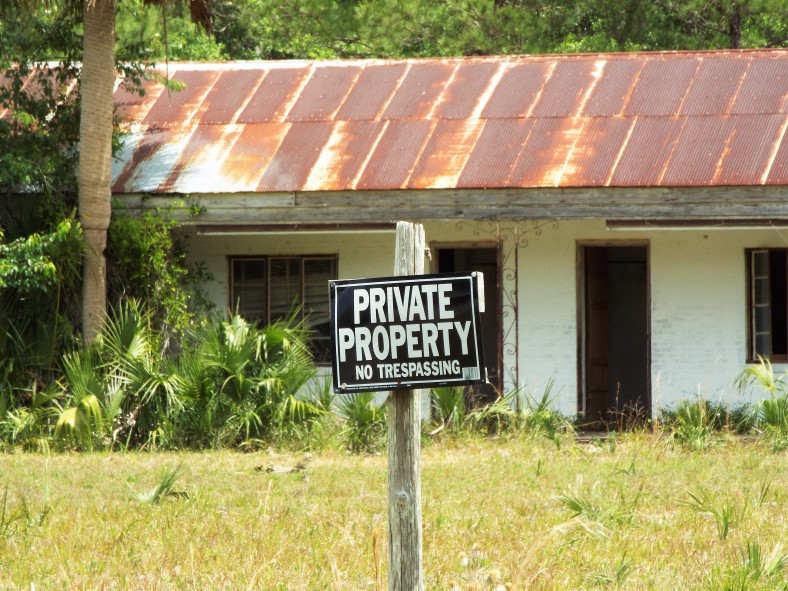 Be sure to get off I-95 at Exit 3 in South Georgia and head west on Georgia 40 to US 17 in Kingsland (just a few miles away). Turn south on US 17 (left) and in a little bit you’ll cross that all too narrow bridge over the St. Marys River and you’ll be in Florida. Just a half mile south on your left you’ll find that first motel in Florida pictured above. Oh there’s no plaque or marker telling you about the history of this place, and that’s a shame. It was part of the gateway to the “New South” and it deserves recognition. It is for sale though! ^.^

Thanks for your visit! Be sure to watch out for the fire ants!